Our team of professional plastic surgeons will carefully consult and complete the treatment according to the patients’ wishes, focusing on treating the eye area, which creates a great influence on the impression of the face. friend.

From the embedding method of double eyelids, to the degreasing and wrinkle removal surgery to solve the eyelid problems caused by the increase, and the inexperienced patients can also receive treatment with peace of mind. 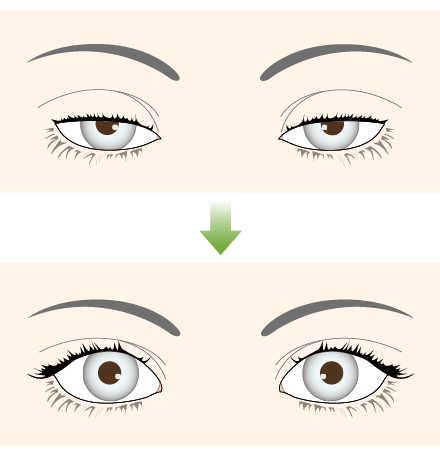 For those who wish to have a surgical operation!

This is the method of eyelid pressing using special medical fibers threaded along the eyelids according to the design the customer expects. It is recommended that patients who do not want to have a surgery, who want to easily undergo double eyelid surgery, and who cannot have long down time to receive treatment. As long as the buried line is taken out, it is possible to return to the original state, and it is also suitable for patients who want to follow the trend of changing the shape of the double eyelids.

Recommended for those who want to have a clearer double eyelids, such as those whose eyelids are swollen or who have slack in the skin and cannot make a clear double eyelids using the burying method. It is also effective to degrease the eyelid.

Incision under the eyebrows

A treatment that cuts the skin at the line under the eyebrows and removes slack in the eyelid skin. Since the original natural weight line is utilized, there is no feeling of shaping and natural rejuvenation is possible.

Eyelid droop refers to a condition where the eyelid hangs down as the strength to raise the upper eyelid is weakened. We treat it by incising the skin, shortening the levator aponeurosis, and raising the eyelid.

By removing excess fat from the inside of the lower eyelid (conjunctiva), it is a treatment that improves swelling, sagging under the eyes without leaving any scratch marks. Recommended for those who want to improve symptoms quickly with minimal downtime.

It is a treatment that rejuvenates the impression of the eyes by removing the swelling under the eyes due to sagging skin and fat and lifting the loose ocular muscles. 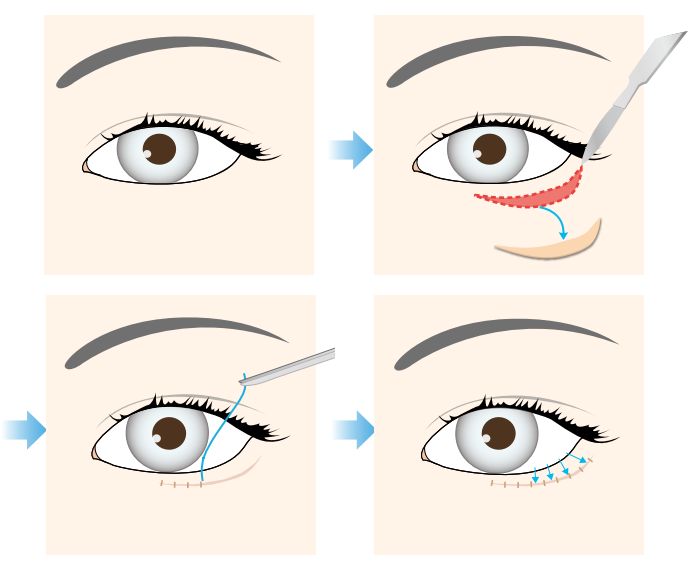 For those who want to have sagging eyes or gentle eyes

We can enlarge the your eyes by approaching from the skin side (surface).
We will excise and suture the skin (2-4 mm width) located about 1 to 2 mm from the lower lash line. By sewing the excised part, the outer corner of the eye is pulled down and the white part (sclera) becomes more visible, resulting in a gentle almond-shaped eye.
It is effective not only for enlarging the eyes, but also for those who are suffering from slanted eyes or want to have slightly more balanced and gentle eyes.

Recommended with customers as follows!

A small procedure that removes excess skin folds at the corners of the eyes to make them appear smaller.
People who have two eyes that are far apart or corner of their eyes tilted up can be improved by this method.

Moving the folds of the skin from the corner of the eye towards the nose will reveal more of the hidden eye area. The Z-shaped depiction, as shown in examples 1 and 2, can adjust the minor surgery to suit the needs of the client.

W-shaped is a technique that does not change the position of the skin flap, but only cuts and stitches the eye area into a shape like the letter W.

Recommended for the following customers

Interfering with a small incision in the eye will make the eyes look longer and balance the entire face. By widening the eyes, the curve from the tail to the lower eyelid becomes softer, giving the impression of large, gently round eyes.

Eye corner expansion is performed by V-Y method. The V-Y method is an operation in which the skin of the tail is cut like the Y, widened and stitched like the V.

The main purpose of eye extension is to widen the width of the eyes, which can also improve sagging and slanting, adjusting the balance of the left and right eyes. In addition, the entire eye can be enlarged by incorporating an eye opening method.

Recommended for the following customers