Today at Eri Clinic Omotesando, we apply the advanced genetic screening test for cancer, which allows for the detection of major diseases through blood tests.
By combining MicroRNA genetic screening, Alzheimer’s disease screening and cerebral infarction, and Telomere screening (life expectancy) testing, we can prevent and diagnose early stage conditions

We recommend that customers conduct a regular check every year.
（It is also possible to detect “pancreatic cancer” which is difficult to detect with diagnostic imaging.）

Thanks to the Advanced Genetics Test, everyone is able to prevent and diagnose early-stage disease to treat and stay healthy. 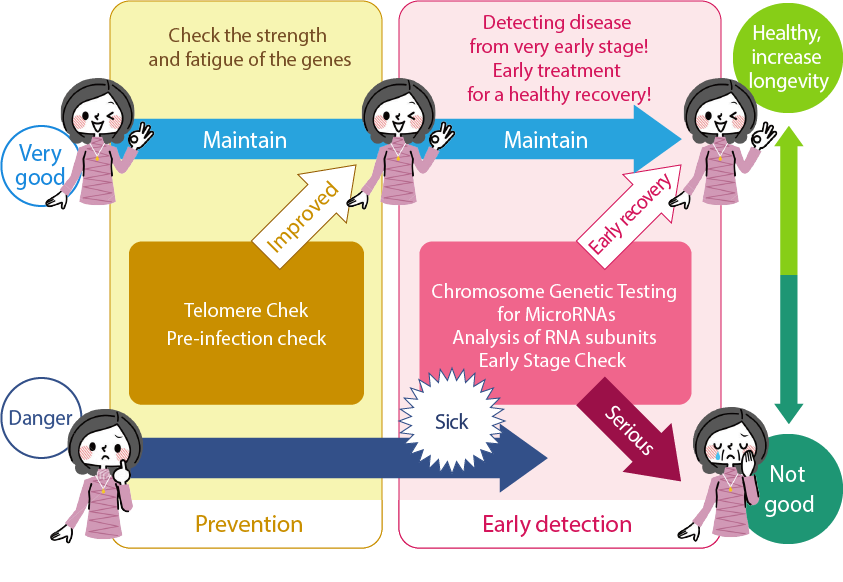 In advanced medical research, early cancer has specific changes in the type and amount of microRNA * in the blood. In this test, in addition to routine screening to determine specific microRNAs in the blood, chain information of all subtype RNA (more than 10,000) in the blood is also analyzed by the faecal system, from which we will evaluate the risk of cancer and Alzheimer. In addition, as it correlates with the change in susceptibility of anticancer drugs and pathological changes such as the disappearance of the tumor, the National Cancer Center expects it to be a new diagnostic marker.

Types of diseases detected through examination

*”MicroRNA” is a small RNA (ribonucleic acid) that can not make a protein; it is involved in controlling the function of more than 100 genes involved in protein production. When the number of microRNAs becomes abnormal, it causes an abnormality in the control of more than 100 related genes, which is known to be associated with the development of “cancer”

This test detects microRNA * in Exom * from cancer cells. By measuring the increase or decrease in microRNAs, it is possible to determine early cancer risk and Alzheimer’s disease. It is especially possible to detect earlier imaging tests and conventional tumor markers.

Detects the secretion of microRNA from diseased cells. 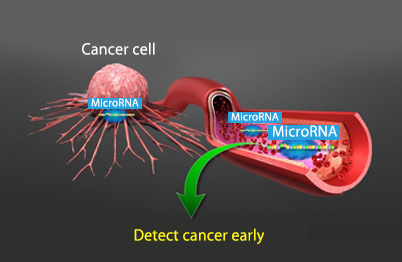 Measure the total number of subunits of RNA (over 10,000) in the blood

Highly accurate disease risk assessment and multi-disease identification can be assessed with one check.

Detected at an earlier stage than the visual examination and existing tumor markers. 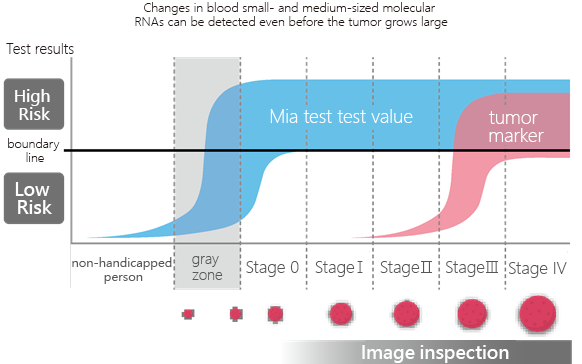 Measure the strength and fatigue of your own genes by measuring the telomeres * and length of your long tail G.

The risk of infection is determined after the examination

*Telomere is a gene at the end of chromosomes, where genetic information is stored, the length of telomeres known as an indicator of the risk of aging / illness. Improving stress and maintaining good fatigue of the genes is associated with slowing the telomere’s shortening speed, preventing aging, maintaining youthfulness and preventing disease. Research has shown that there is a telomere extension method, rejuvenating from the cell and can hinder “cancer.”

About the telomeres test (health-longevity) (pre-test)

This test measures the degree of fatigue and intensity of the telomeres. From the level of fatigue, it can be understood that the body is near a healthier state or nearer to the onset of disease. From strength can know the body is susceptible to aging diseases due to the age of genetic (age of Telomeres) or not. 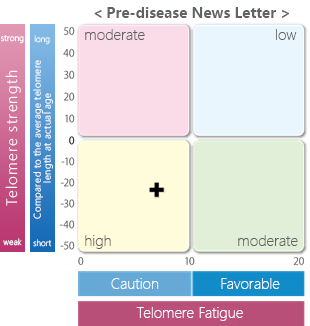 It takes about 1 month from blood collection until diagnosis based on test report.

1. Consulting
The Doctor will explain the contents of the examination.Customer fill out the questionnaire.
2. Take blood
Take blood.Just taking the blood to test is enough.
3. Test
Perform genetic testing related to cancer in the blood for about 1 month.
4. Diagnose
The director will explain the test results.Based on our results, we offer cancer prevention treatments for each client.

From Now, Please begin the development prevention for “To become the healthy body which does NOT become Cancer”
Eri Clinic Omotesando`s provided most advanced menu such as “Cancer Genetic Test” as well as “Most Advanced NK Cell Immune Therapy”

Eri Clinic recommends to understand your very early stage cancer risk assessment, and then reconsider your current eating habit and a living habit, as well as take the prevention therapy such as “Super Premium NK Cell Immune Therapy”.